Works with all USB 3.0-equipped Mac and Windows computers and Apple iPad*

THE ZOOM UAC-8USB 3.0 SuperSpeed Audio Converter for Mac and PC

There’s a whole new world of possibilities for Mac and PC Creators — high-speed, high-resolution, and low-latency. Upgrade your rig with the rackmountable UAC-8, and add 18 inputs and 20 outputs to your USB 3.0-equipped Mac or Windows computer—even your iPad.* Plug in a microphone, line-level device, or instrument and start bringing your ideas to life, or take the UAC-8 onstage to enable high-res audio playback, all the way up to 24-bit/192k.

The USB 3.0 SuperSpeed transfer protocol used by the UAC-8, with a speed of 2.0 ms roundtrip @ 96kHz / 32 samples, is ten times faster than USB 2.0 and six times faster than FireWire 800. That not only ensures low latency, it provides a data stream that’s unaffected by computer jitter (slight variations in timing), so there’s no need to connect an external master clock source.

INPUTS
The UAC-8 provides a wide variety of both analog and digital connectors. Eight front panel combo XLR/TRS inputs accept mic- and line-level signals, and you can even plug instruments directly into Inputs 1 and 2. Dedicated input gain controls and Clip LEDs make it easy to set optimum input levels, and a Phantom Power switch enables the use of condenser microphones.

OUTPUTS
The UAC-8 has dual balanced analog TRS output jacks for connection to monitors, and there are also 8 discrete balanced TRS analog line outputs for multichannel monitoring or connection to external effects devices. A large front-panel Output knob offers fast control over output level, and there are two independent ¼” stereo headphone jacks, each with its own dedicated volume control, for private monitoring.

DIGITAL I/O
8 ADAT and stereo S/PDIF digital inputs/outputs allow for the connection of up to 10 external channels, and built-in Word Clock enables easy integration into any system. In addition, MIDI In and Out is provided to allow interfacing with devices such as electronic keyboards and drum machines.

The UAC-8 uses high-end components such as the AKM AK5388 analog-to-digital converter and AKM AK4413 digital-to-analog converter. In addition, the UAC-8 performs 4-times upsampling during both analog-to-digital and digital-to-analog conversion. In other words, when the sampling frequency is set to 44.1kHz or 48kHz, the UAC-8 processes the signal at high resolution 176.4kHz or 192kHz.

In standalone mode, the UAC-8 can be used as an 8-channel mic preamp and analog-to-digital or digital-to-analog converter without being connected to a computer.

Extend your capabilities with software

UAC-8 MixEfx is a free Macintosh and Windows compatible application designed specially by Zoom for the UAC-8. It provides a comprehensive onscreen mixer, with independent level, phase reversal, and panning control for each channel. UAC-8 MixEfx also allows you to freely route all inputs to all outputs and to create custom mixes. In addition, MixEfx features effects like reverb and echo, and complete mixes can be stored in three different memory slots, allowing instant recall. 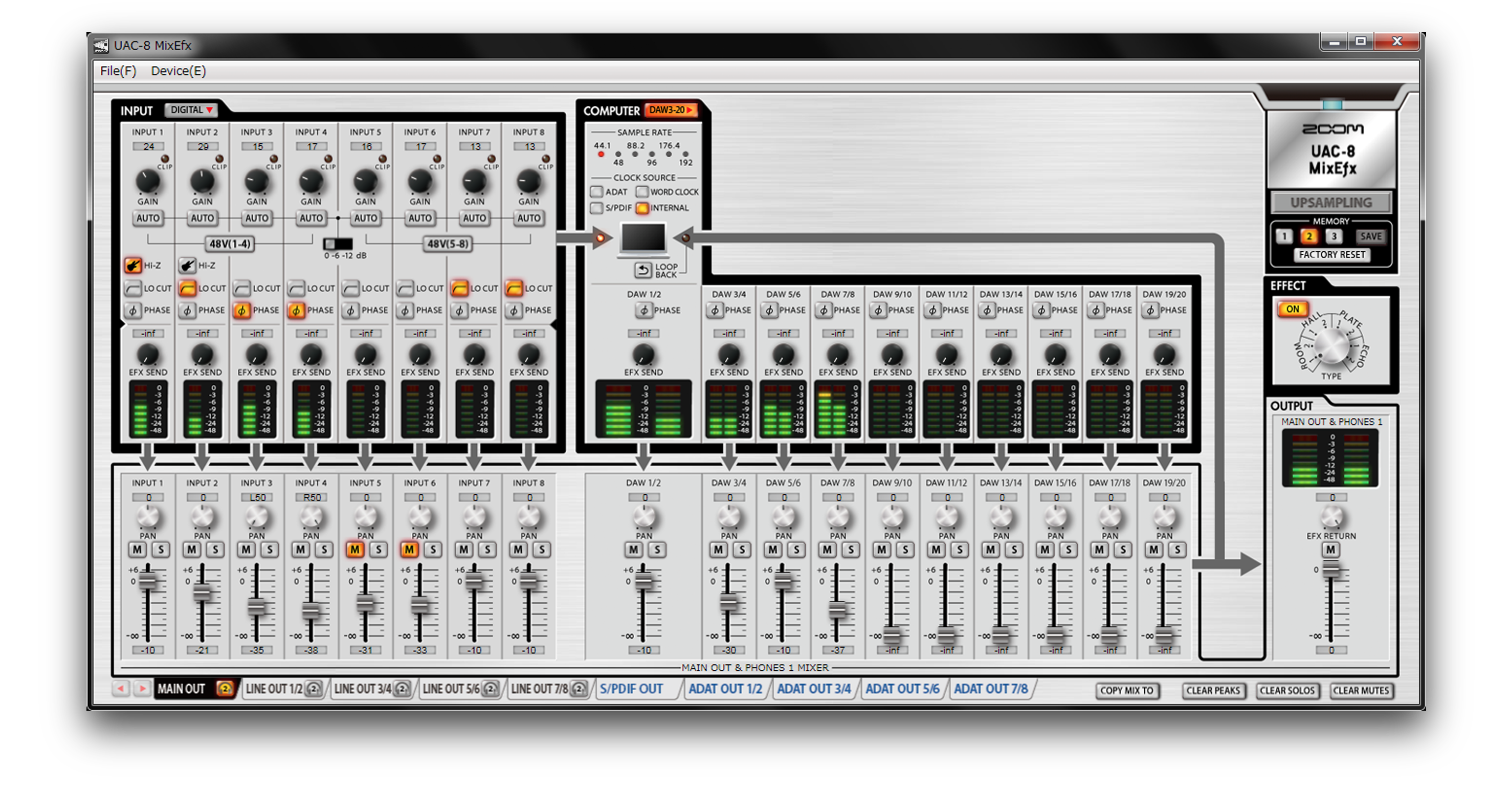 Features at a glance

Do NOT follow this link or you will be banned from the site!

FREE NZ SHIPPING ON ALL ORDERS OVER $100 Dismiss